I thought it was about time I put pen to paper…or keyboard in this instance about how marathon training is going.  I’m absolutely loving the video making process at the moment and the marathon training series that i’m producing has to be the most exciting one yet….for me anyway!  However there are always things you can’t quite convey via video that are easier to jot down in a written format, therefore I want to give you a quick overview as to how i’m feeling heading into week 8/17 of marathon training.

The first thing I must say is a big thank you to my coach Doug from TMR coaching, he has been working hard, adapting the plan to suit along the way, providing insights into progress, snippets of information on what can be improved and overall encouragement when i’ve needed it the most.

After a great start in weeks 1 & 2 clocking 45 & 46 miles respectively, I headed into week 3 with an optimism I hadn’t felt since this time last year when we were training for the Newport Half Marathon.  For 16 weeks I trained like a beast alongside James without injury, illness or pretty much any issue….insane to think that’s possible in the height of winter when you have kids carrying lurgy everywhere they go!

This year was to be different…I started my week off with an easy run on Monday and after that felt very “sinusy”, something I wasn’t used too as I don’t suffer with sinus issues that much.  Thankfully I had the Speedway 10k at the end of that week so I allowed myself time to calm the mileage down and rest.  I took every opportunity to steam breath, use the salt nasal spray and drink as much homemade vegetable soup as possible in a bid to fight off illness.

Again, I attempted my easy Monday run, felt great, Tuesday rolled around and I went back down hill again…this time with more “virus” type symptoms such as major fatigue, headaches, sickness etc.  I tackled Tuesday night’s fartlek session and that was me down and out for the next week.  I did not run until the following Tuesday.  In my 4 and a bit years as a runner, I haven’t been ill enough to take me out of running for that long…coupled with that fact that I was just getting started with marathon training, it just crippled me mentally.

The following Tuesday saw the commencement of week 5 and I did my best to get up and go, starting back with a slower than normal fartlek session.  I took an extra day off (Monday) for precautionary reasons, not wanting to rush things as all I kept thinking whilst I couldn’t run was “I don’t want to be off for this long again”.  The remainder of the week was sluggish but at least we were moving forwards.  I knew it felt like we were starting from scratch but it was good to be training and I wasn’t going to take it for granted.  That week ended on 40 miles…a solid amount to return too.

Week 6 is where we finally had lift off…no more excuses, just training and getting back to where we needed to be mileage wise.  Monday was slow and a struggle but that was the last time I can say that about a run until this present day.  Tuesday’s session was a belter, I felt alive, I felt like things were working again and my mojo was definitely back!  We finished the week strong and finally hit over 50 miles.

Week 7 followed a similar pattern except for that fact that the Monday run wasn’t as sluggish as week 6’s.  Both midweek sessions were completed well and then the turning point came on Saturday morning….

I have been doing long run workouts every weekend in a bid to increase my speed endurance and mental strength over the distance…the first 6 weeks have been based around putting “efforts” in on the hills but this week was the week we got more specific, we hit the tarmac.

45 minutes warm up followed by 3 x 20 minutes at half marathon pace (6.05 min per mile) followed by 45 mins cool down.  Now in the previous weeks with similar workouts we’ve been hitting late 6’s / early 7’s due to the hills so I anticipated this week…with fatigue, i’d hit around 6.20.

The thing is…I didn’t.  My splits ended up being 6.21, 6.15, 6.12!  Now to put this into perspective, the first 8 minutes of each rep were a gentle incline on a rather wet and (in places) muddy trail.  We then peeled out onto the road for the final 12 minutes.  I could see my watch was hovering on 5.55/6.00/6.05 on those sections and it felt amazing!  To hit that speed deep into the plan within the highest mileage weeks i’ve ever run was an incredible feeling…it all just clicked!

Overall, it hasn’t been the easiest start to a plan i’ve ever had but ultimately we are now making progress and that for me is key.  I am super keen to push on now into this next part of the plan and really start to dial into marathon pace. 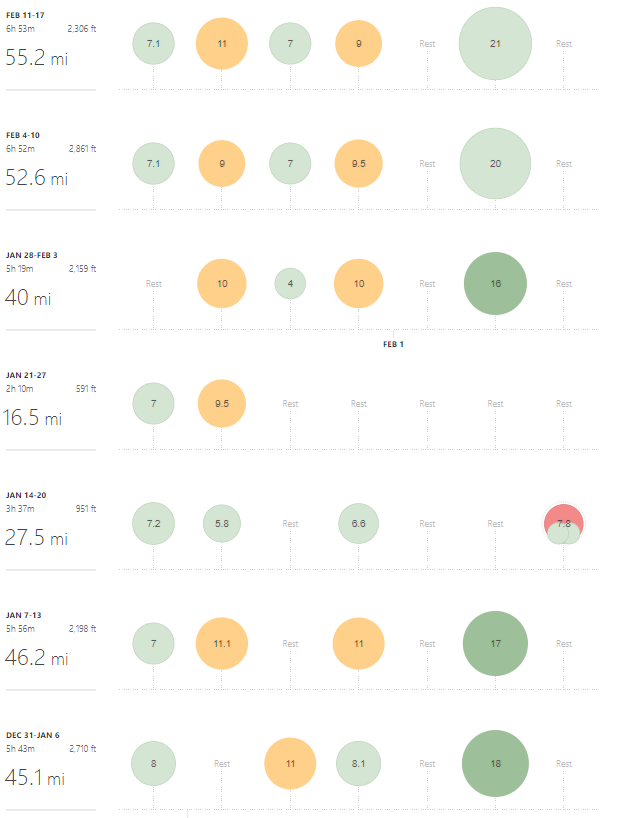 You can now Donate to support the channel!